Summer is almost upon us and nothing makes Summer better than reading some refreshing and vitalizing books. But the problem is there are so many of them, so which ones to pick for a perfect get away from this heat?

Worry not, we’ve got it covered! Here’s our list of the 10 Books To Read This Summer.

10 Books To Read This Summer

From New York Times bestselling author of the “twisty-mystery” (Vulture) novel In a Dark, Dark Wood, comes The Woman in Cabin 10, an equally suspenseful novel from Ruth Ware—this time, set at sea.
In this tightly wound story, Lo Blacklock, a journalist who writes for a travel magazine, has just been given the assignment of a lifetime: a week on a luxury cruise with only a handful of cabins. At first, Lo’s stay is nothing but pleasant: the cabins are plush, the dinner parties are sparkling, and the guests are elegant. But as the week wears on, frigid winds whip the deck, gray skies fall, and Lo witnesses what she can only describe as a nightmare: a woman being thrown overboard. The problem? All passengers remain accounted for—and so, the ship sails on as if nothing has happened, despite Lo’s desperate attempts to convey that something (or someone) has gone terribly, terribly wrong…
With surprising twists and a setting that proves as uncomfortably claustrophobic as it is eerily beautiful, Ruth Ware offers up another intense read.

Capturing the distinct rhythms of Jamaican life and dialect, Nicole Dennis-Benn pens a tender hymn to a world hidden among pristine beaches and the wide expanse of turquoise seas. At an opulent resort in Montego Bay, Margot hustles to send her younger sister, Thandi, to school. Taught as a girl to trade her sexuality for survival, Margot is ruthlessly determined to shield Thandi from the same fate. When plans for a new hotel threaten their village, Margot sees not only an opportunity for her own financial independence but also perhaps a chance to admit a shocking secret: her forbidden love for another woman. As they face the impending destruction of their community, each woman fighting to balance the burdens she shoulders with the freedom she craves must confront long-hidden scars. From a much-heralded new writer, Here Comes the Sun offers a dramatic glimpse into a vibrant, passionate world most outsiders see simply as paradise.

3. Break in Case of Emergency by Jessica Winter

An irreverent and deeply moving comedy about friendship, fertility, and fighting for one’s sanity in a toxic workplace.
Jen has reached her early thirties and has all but abandoned a once-promising painting career when, spurred by the 2008 economic crisis, she takes a poorly defined job at a feminist nonprofit. The foundation’s ostensible aim is to empower women, but staffers spend all their time devising acronyms for imaginary programs, ruthlessly undermining one another, and stroking the ego of their boss, the larger-than-life celebrity philanthropist Leora Infinitas. Jen’s complicity in this passive-aggressive hellscape only intensifies her feelings of inferiority compared to her two best friends—one a wealthy attorney with a picture-perfect family, the other a passionately committed artist—and so does Jen’s apparent inability to have a baby, a source of existential panic that begins to affect her marriage and her already precarious status at the office. As Break in Case of Emergency unfolds, a fateful art exhibition, a surreal boondoggle adventure in Belize, and a devastating personal loss conspire to force Jen to reckon with some hard truths about herself and the people she loves most.
Jessica Winter’s ferociously intelligent debut novel is a wry satire of celebrity do-goodism as well as an exploration of the difficulty of navigating friendships as they shift to accommodate marriage and family, and the unspoken tensions that can strain even the strongest bonds.

4. The Hopefuls by Jennifer Close 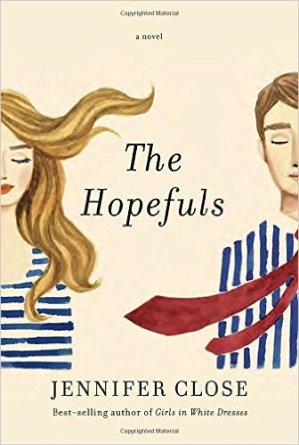 When Beth arrives in Washington, D.C., she hates everything about it: the confusing traffic circles, the ubiquitous Ann Taylor suits, the humidity that descends each summer. At dinner parties, guests compare their security clearance levels. They leave their BlackBerrys on the table. They speak in acronyms. And once they realize Beth doesn’t work in politics, they smile blandly and turn away. Soon Beth and her husband, Matt, meet a charismatic White House staffer named Jimmy and his wife, Ashleigh, and the four become inseparable, coordinating brunch, birthdays, and long weekends away. But as Jimmy’s star rises higher and higher, their friendship–and Beth’s relationship with Matt–is threatened by jealousy, competition and rumors.

Six responsible adults. Three cute kids. One small dog. It’s just a normal weekend. What could possibly go wrong?
Sam and Clementine have a wonderful, albeit, busy life: they have two little girls, Sam has just started a new dream job, and Clementine, a cellist, is busy preparing for the audition of a lifetime. If there’s anything they can count on, it’s each other.
Clementine and Erika are each other’s oldest friends. A single look between them can convey an entire conversation. But theirs is a complicated relationship, so when Erika mentions a last minute invitation to a barbecue with her neighbors, Tiffany and Vid, Clementine and Sam don’t hesitate. Having Tiffany and Vid’s larger than life personalities there will be a welcome respite.
Two months later, it won’t stop raining, and Clementine and Sam can’t stop asking themselves the question: What if we hadn’t gone?
In Truly Madly Guilty, Liane Moriarty takes on the foundations of our lives: marriage, sex, parenthood, and friendship. She shows how guilt can expose the fault lines in the most seemingly strong relationships, how what we don’t say can be more powerful than what we do, and how sometimes it is the most innocent of moments that can do the greatest harm.

6. The Girls by Emma Cline

Northern California, during the violent end of the 1960s. At the start of summer, a lonely and thoughtful teenager, Evie Boyd, sees a group of girls in the park, and is immediately caught by their freedom, their careless dress, their dangerous aura of abandon. Soon, Evie is in thrall to Suzanne, a mesmerizing older girl, and is drawn into the circle of a soon-to-be infamous cult and the man who is its charismatic leader. Hidden in the hills, their sprawling ranch is eerie and run down, but to Evie, it is exotic, thrilling, charged—a place where she feels desperate to be accepted. As she spends more time away from her mother and the rhythms of her daily life, and as her obsession with Suzanne intensifies, Evie does not realize she is coming closer and closer to unthinkable violence, and to that moment in a girl’s life when everything can go horribly wrong.

7. The Essex Serpent by Sarah Perry

Set in Victorian London and an Essex village in the 1890’s, and enlivened by the debates on scientific and medical discovery which defined the era, The Essex Serpent has at its heart the story of two extraordinary people who fall for each other, but not in the usual way.
They are Cora Seaborne and Will Ransome. Cora is a well-to-do London widow who moves to the Essex parish of Aldwinter, and Will is the local vicar. They meet as their village is engulfed by rumours that the mythical Essex Serpent, once said to roam the marshes claiming human lives, has returned. Cora, a keen amateur naturalist is enthralled, convinced the beast may be a real undiscovered species. But Will sees his parishioners’ agitation as a moral panic, a deviation from true faith. Although they can agree on absolutely nothing, as the seasons turn around them in this quiet corner of England, they find themselves inexorably drawn together and torn apart.
Told with exquisite grace and intelligence, this novel is most of all a celebration of love, and the many different guises it can take.

8. The Vegetarian by Han Kang 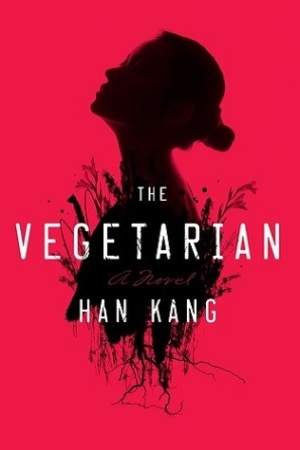 Before the nightmare, Yeong-hye and her husband lived an ordinary life. But when splintering, blood-soaked images start haunting her thoughts, Yeong-hye decides to purge her mind and renounce eating meat. In a country where societal mores are strictly obeyed, Yeong-hye’s decision to embrace a more “plant-like” existence is a shocking act of subversion. And as her passive rebellion manifests in ever more extreme and frightening forms, scandal, abuse, and estrangement begin to send Yeong-hye spiraling deep into the spaces of her fantasy. In a complete metamorphosis of both mind and body, her now dangerous endeavor will take Yeong-hye—impossibly, ecstatically, tragically—far from her once-known self altogether.
A disturbing, yet beautifully composed narrative told in three parts, The Vegetarian is an allegorical novel about modern day South Korea, but also a story of obsession, choice, and our faltering attempts to understand others, from one imprisoned body to another.

The unforgettable New York Times best seller begins with the story of two half-sisters, separated by forces beyond their control: one sold into slavery, the other married to a British slaver. Written with tremendous sweep and power, Homegoing traces the generations of family who follow, as their destinies lead them through two continents and three hundred years of history, each life indeliably drawn, as the legacy of slavery is fully revealed in light of the present day.
Effia and Esi are born into different villages in eighteenth-century Ghana. Effia is married off to an Englishman and lives in comfort in the palatial rooms of Cape Coast Castle. Unbeknownst to Effia, her sister, Esi, is imprisoned beneath her in the castle’s dungeons, sold with thousands of others into the Gold Coast’s booming slave trade, and shipped off to America, where her children and grandchildren will be raised in slavery. One thread of Homegoing follows Effia’s descendants through centuries of warfare in Ghana, as the Fante and Asante nations wrestle with the slave trade and British colonization. The other thread follows Esi and her children into America. From the plantations of the South to the Civil War and the Great Migration, from the coal mines of Pratt City, Alabama, to the jazz clubs and dope houses of twentieth-century Harlem, right up through the present day, Homegoing makes history visceral, and captures, with singular and stunning immediacy, how the memory of captivity came to be inscribed in the soul of a nation.

10. The Feathered Bone by Julie Cantrell 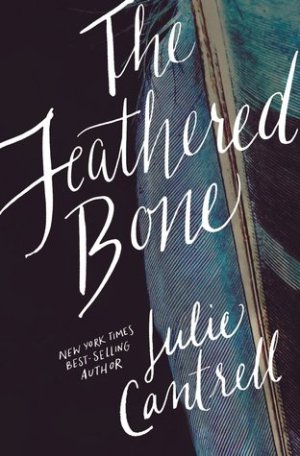 “Feathers—no matter what size or shape or color—are all the same, if you think about them. They’re soft. Delicate. But the secret thing about feathers is . . . they are very strong.”
In the pre-Katrina glow of New Orleans, Amanda Salassi is anxious about chaperoning her daughter’s sixth grade field trip to the Big Easy during Halloween. And then her worst fears come true. Her daughter’s best friend, Sarah, disappears amid the magic and revelry—gone, without a trace.
Unable to cope with her guilt, Amanda’s daughter sinks in depression. And Amanda’s husband turns destructive as he watches his family succumb to grief. Before long, Amanda’s whole world has collapsed.
Amanda knows she has to save herself before it’s too late. As she continues to search for Sarah, she embarks on a personal journey, seeking hope and purpose in the wake of so much tragedy and loss.
Set amidst the murky parishes of rural Louisiana and told through the eyes of two women who confront the darkest corners of humanity with quiet and unbreakable faith, The Feathered Bone is Julie Cantrell’s master portrait of love in a fallen world.